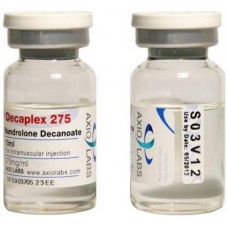 Nandrolone binds to the androgen receptor to a greater degree than testosterone, but due to its inability to act on the muscle in ways unmediated by the receptor, has less overall effect on muscle growth. The drug is also unusual in that unlike most anabolic steroids, it is not broken down into the more reactive DHT by the enzyme 5a-reductase, but rather into a less effective product. As such, some of the negative effects associated with most such drugs are somewhat mitigated.

The positive effects of the drug include muscle growth, appetite stimulation and increased red blood cell production and bone density. Clinical studies have shown it to be effective in treating anaemia, osteoporosis and some forms of neoplasia including breast cancer, and also acts as a progestin-based contraceptive. Nandrolone is also extensively used by bodybuilders and other athletes seeking an edge in professional competition.