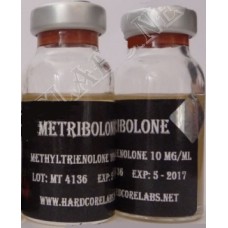 Metribolone, which is also known as Methyltrienolone, is commonly referred to as “Oral Tren” due to its resemblance to structure of Trenbolone. This potent and non-aromatizable androgen is highly effective even at low doses. Metribolone is an extremely powerfull steroid, some experts even call it monstreous. It is hard ro buy the real products and API's. Mostly because its not only extremely potent, but also extremely expensive. Underground manufacturers that don't have direct contact with an manufacturer of these powders and don't have the ability to analyse them will end up with a substitution or a very underdosed product. We all seen that during our analyses and everyone elso know this from the market in recreational drugs. Most recreational drugs (cocaine or speed by example) are cut heavily, because everyone involved wants to make a profit. The strong anabolic/androgenic actions of Metribolone have been utilized by medical practitioners, over the years, to inhibit the local effects of endogenous estrogens for regressing tumor growth in incidents of advanced breast cancer. Use of low-grade Metribolone or Metribolone abuse can lead to possible progesterone related side effects. It can also lead to side effects such as gynecomastia, fluid retention, acne, oily skin, and development of breasts in men. For steroid users making use of Metribolone, antiestrogens such as Clomid and Nolvadex are highly recommended for restoring the natural production of testosterone after end of a steroid cycle.