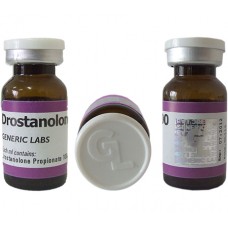 Drostanolone propionate is an injectable anabolic steroid derived from dihydrostestosterone (DHT). Here, the DHT has been modified with a 2-methyl group to increase its anabolic properties, making this drug much more effective at promoting muscle growth than the non-methylated DHT. Drostanolone propionate was founded in the 1950's. A company called Syntex developed the compound along with such other well known steroids as Anadrol and Superdrol. Around ten years later masteron drostanolone was first introduced as a prescription medication. In the US, the FDA approved drostanolone for use in postmenopausal women for the treatment of inoperable breast cancer. Eventually other prescription medications were developed which better served the same conditions that this drug was originally approved for, and slowly manufacturers began to voluntarily discontinue production of it. Now days, this drug is no longer available as a prescription drug and can only be purchased on the black market where it is still a popular compound amongst the bodybuilding and performance enhancing community. Masteron ,as it is often referred to, is a steroid with moderate anabolic properties. This steroid is most often used by bodybuilders who are preparing for a show due to the fact that the androgenic nature of it will give a hard, defined look to the muscles. Users of masteron often report increases in strength and muscular stamina. It is also used by athletes in speed related and weight regulated sports, where it is a favorite due to its ability to produce good gains in lean muscle mass and strength with some reduction in body fat and minimal side effects. Drostanolone propionate cannot convert to estrogen, meaning that estrogenic side effects such as water bloat and gynecomastia shouldn't be a concern when running this steroid. Masteron is most often used in cutting cycles where it is stacked with other hardening, non aromatizing agents such as trenbolone and winstrol. These types of cycles will produce usually no water weight and the mass gained off of them will be quality rock hard muscle mass. Masteron can be androgenic and the usual androgen related side effects are possible from using this substance. Androgenic side effects can include things such as oil skin, acne, and increased body and facial hair. Like all other anabolic/androgenic steroids when taken in dosages that can promote muscle growth, masteron can suppress the body's natural testosterone function and production. Because of this, a proper post cycle therapy protocol should be followed upon the discontinuance of a cycle. Most users typically choose to run agents such as clomid and HCG to effectively get their body to start producing testosterone from the testes and pituitary gland again. Men often take masteron in dosages of 300-600mg per week for 6-12 weeks depending on how they respond and what the goals are. Because of its short acting propionate ester, masteron should be injected ever other day to keep blood levels as stable as possible. Women who choose to run masteron often do so in a dosage of 50-100mg per week. At this dosage, androgen related masculizing side effects are rare and can be kept under control. Masculizing side effects in women can include such things as deepening of the voice, facial hair growth, and clitoral enlargement.