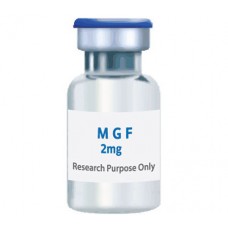 MGF is derived from the IGF-I gene by alternative splicing and has different 3' exons to the liver or systemic type (IGF-IEa). It has a 49 base pair insert in the human, and a 52 base pair insert in rodents, within the E domain of exon 5. This insert results in a reading frame shift, with a different carboxy terminal sequence to that of systemic IGF-IEa. MGF and the other IGF isoforms have the same 5' exons that encode the IGF-I ligand-binding domain. Processing of pro-peptide yields a mature peptide that is involved in upregulating protein synthesis. However, there is evidence that the carboxy-terminal of the MGF peptide also acts as a separate growth factor. This stimulates division of mononucleated myoblasts or satellite (stem) cells, thereby increasing the number available for local repair. MGF appears to have a dual action in that, like the other IGF-I isoforms, it upregulates protein synthesis as well as activating satellite cells. However, the latter role of MGF is probably more important as most of the mature IGF-I will be derived from IGF-IEa during the second phase of repair. Nevertheless, it has been shown that MGF is a potent inducer of muscle hypertrophy in experiments in which the cDNA of MGF was inserted into a plasmid vector and introduced by intramuscular injection. This resulted in a 20 % increase in the weight of the injected muscle within 2 weeks, and the analyses showed that this was due to an increase in the size of the muscle fibres. Similar experiments by other groups have also been carried out using a viral construct containing the liver type of IGF-I, which resulted in a 25 % increase in muscle mass, but this took over 4 months to develop (Musaro et al. 2001). Hence, the dual role MGF plays in inducing satellite cell activation as well as protein synthesis suggests it is much more potent than the liver type or IGF-IEa for inducing rapid hypertrophy. The peptide is commonly takin in a dosage of 200-400 mcg per day and works favorably with other substances such as IGF and PEG.